If you follow me on Instagram then you will have come across my giant Purple Doily already. I’ve also posted a few wip pics of it over here. Now that it’s finished I’ve been meaning to share it for a while but writing this post has been difficult. Mainly because in means sharing a little bit more about myself. Just sharing a tah-dah post doesn’t do this doily justice. Making it saved me from completely cracking last month.

I have struggled with migraines since I was a kid. They come when they will and have been known to stick around for weeks. They also don’t respond well to pain medication. I can take the edge off the bad ones but that’s it. More recently, I got diagnosed with IBS (2012) and with fibromyalgia last summer.  The IBS means that unless I really cannot handle the pain I have to avoid all pain meds to avoid a flare up. The fibromyalgia means I’m very rarely not in pain.

All this has meant learning some coping mechanisms. For years I used books or tv as a distraction and then I learnt to crochet which has been an absolute lifesaver. The trick is to find something that’s takes so much of your attention that you ignore the pain. Up until recently my coping mechanisms worked perfectly. But after a really long break where I began to think my migraines were finally settling down I got my longest and most severe one ever. For the first time I couldn’t focus on books and noise/light became a big issue. It has also stuck around for months varying in intensity from day to day. I got it in June and it’s only just gone.

So I began to experiment with something I thought I would never want to make, Doilies! Up until now I just haven’t seen a use for them in my life.

The idea was to find a pattern so intricate that it would require all of my attention to follow. But one that also didn’t require me to read much or involve colour changes. It also needed to be a large enough project to keep me distracted for a while. This led me to the “Double Pineapple Doily” by the American Thread Company. 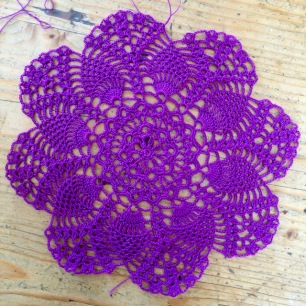 All the stitches in the pattern are really simple. It is also made of up continuous pattern repeats. Which means the pattern isn’t actually very hard to follow and it is easy to remember for each round. Although, at the same time it is really easy to lose count, to miss a stitch or to make too many. I lost count of how many times I had to frog back the second round of pineapples upon discovering in the last row that I had too many chain loops to finish them off. The chain rows on the border I know took me 4 attempts! But trying to keep count took so much of my focus that I hardly felt the migraine. It was always there in the background but I didn’t feel the need to curl up in a ball in bed and just wait for it to be over. 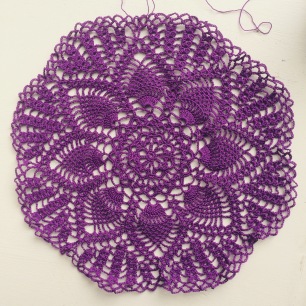 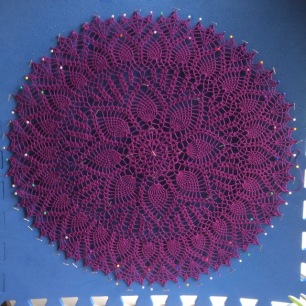 I am now a complete doily convert. The finished result is stunning. It also completely lived up to its promise. It kept me completely distracted for days!!! I’m now completely hooked on making them whenever the pain gets too much.

The only issue I have now is to figure out how to display it. It is just so big. wonderfully so but too big to use to line a bread basket or stick under a vase of flowers. The table I have isn’t big enough to do it justice and I can’t find a square frame large enough for its 54inch diameter. Right now I’m strongly leaning towards framing it between to pieces of acrylic glass. I came across lovely diy for this technique on A beautiful Mess (here).  A doily as a statement art piece sounds like a pretty solid plan.

If you’ve made it this far thanks for stopping by!

3 thoughts on “Doilies for Migraines”

I'm a crochet addict who lives in the south west or Ireland with my partner and a whole bunch of animals.

I use this space to share inspiration, patterns and updates on what I'm working on at the moment.

Thanks for stopping by!

Follow My Crafty Musings on WordPress.com
Join 97 other followers